If you would like to contribute to this Community Update page with an event, service or product relating to Pemberton Heights please email gavin@gavinhughes.ca. 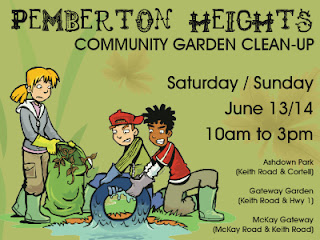 Please join your neighbours for the annual Pemberton Heights community garden cleanup! We will be weeding, trimming and tidying three of our community garden spaces: Ashdown Park and our two "gateway gardens" at the entrances to Pemberton Heights to make our neighbourhood look its best. Please bring your own garden tools, bags, gloves and anything else you need to help keep our community looking its best! Plant donations are welcome. 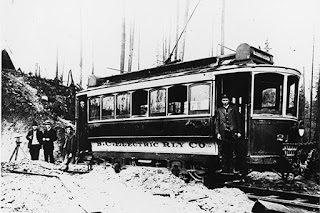 There is something comforting about driving up MacKay Avenue towards Pemberton Heights.

Perhaps the trees and the creekside offer instant stillness and the hint of countryside give a sense of seclusion from the busy streets that are now endemic to the North Shore.  The Corner Stone (formerly The Corner Store) offers a last stop for milk, a meeting place, or an after school candy run. It has quietly weathered the tests of time and provided a hub for the people that live here.

“ We are lucky to have a community that supports this store,” says Tracey Cochrane, current owner of The Corner Stone.

The Corner Store has survived over a century’s worth of development, depression, war, boom and bust by creating a community hub that hangs on in our modern day.

“In many ways, the term the ‘Corner Stone’, we chose that name because it was more fitting in many ways. We really have become the corner stone in the  neighbourhood,” says Cochrane. “From lattes and cold beer to penny candy and three course meals, we have it all.”

Part of the store’s longevity and success can be contributed to being located at a stop on the Route #3 Streetcar that travelled from Esplanade to the Capilano River. The car travelled west to 20th Avenue where via a 450-foot wide and staggering 98-foot high wooden train trestle crossed Mackay Creek.

The western extension of the #3 line originally opened in 1912 and ran until it was condemned and closed in 1943. Just 4 years later in 1947, North Vancouver closed all remaining Streetcar lines.
If you would like to learn more about the history of Pemberton Heights please visit
www.northvanmuseum.ca.

Photo above was taken in 1910 during construction of the western line. This photo is roughly at Mackay Avenue and 22nd. (Courtesy of the North Vancouver Museum & Archives)

The Corner Store Then & now 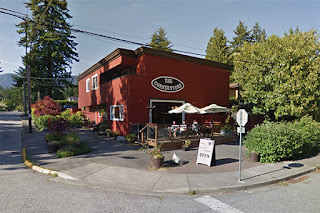 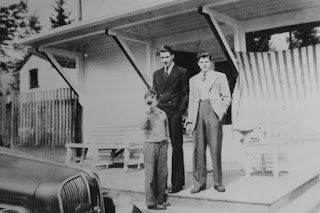 The names of the two men in the picture have been lost to time, but according to the handwritten note on the back of the photo, the boy drinking a coke in front of the Corner Store in 1942 is Gordon Hines. Several local families have owned the store over the years including the Palmers, the Johnsons as well as current owner Tracey Cochrane.

(Photo above courtesy of Tracey Cochrane) 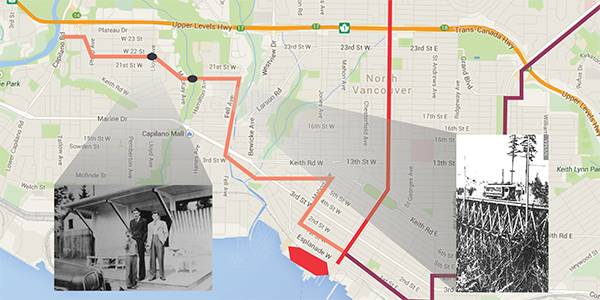 Church will remain as a Community Center 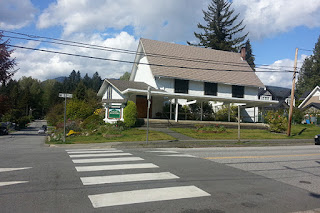 After more than a year of discussions, community stakeholders, Councillors and city planners see a new vision for the Church buildings keeping both daycare and preschool services in Pemberton Heights.

The District of North Vancouver has purchased the United Church property on 22nd Avenue which will allow both the daycare and the preschool to continue operations.

A formal announcement by the district will be forthcoming but the community is welcome to attend at The Corner Stone at 7pm on May 7 to thank the district for their support.

“This is a big win for the neighbourhood because now for the first time we actually have something that we can hope to call a community center,” says Colin Metcalfe, President, Pemberton Heights Community Association. “We are about 700 plus homes and there really isn’t anything else for us to call a community center. With this deal we have something that our kids can enjoy for years to come.”

Councillors Doug Mackay-Dunn and Lisa Muri were  early supporters in the community’s efforts along with Brian Bydwell and Ryan Malcolm in the District’s Planning office.

“The real credit should be given to Colin [Metcalfe] and the Pemberton Heights Community Association,” says Mackay-Dunn.  “Pemberton Heights and everyone on the west side is under-served. At the very the least they need something that they can use for a community meeting place. The church has done that for decades. To see that lost would be a significant loss to the community.”
Metcalfe was quick to give credit to other stakeholders and said that this was a real group effort by many members of the community including Herman Mah, Vice President PCHA , Mary Charleson formerly from the Parent Advisory Council, Shawna Ready, chair of the Mums Group and many others.

Metcalfe mentioned that the District will move forward with the daycare and the preschool and will continue to work with the district on establishing the community’s goals for the site. The PHCA will facilitate the discussions between the neighbourhood and the district and set up a series of meetings to discuss where to go from here.

“At the end of the day it’s no longer a church, it’s been decommissioned and now it’s just a building,” says Mackay-Dunn. “You have to get the best and highest use out of the building, which is to serve the community.  What the district will be doing now is reaching out to the Pemberton Heights Community Association and the community to figure out the best use.” 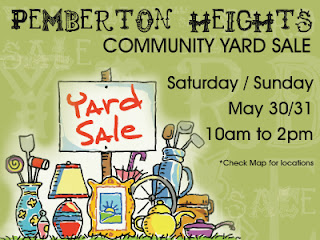 Gavin Hughes is an independently owned and operated broker member of Oakwyn Realty. This is not an offer for sale. Not intended to induce breach of an existing agency agreement.

2022 PembertonHeights.ca, All Rights Reserved. Contents of this website, including the photography & videos, may not be used without written consent from Gavin Hughes. Maximum effort is put towards the details but cannot guarantee, buyer to verify all details.